Delivery as soon as 30 mins! Get deliveries of up to 25 items with Flash™ 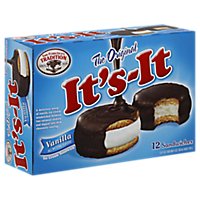 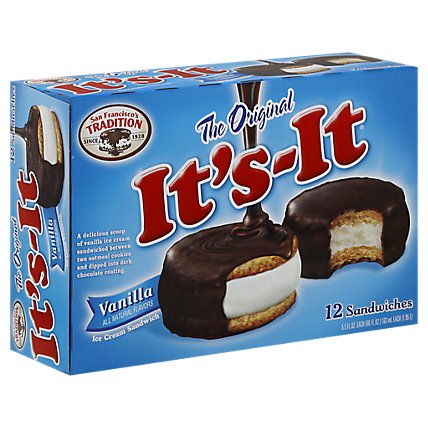 All natural flavors. A delicious scoop of vanilla ice cream sandwiched between two oatmeal cookies and dipped into dark chocolate coating. San Francisco's tradition since 1928. The original. American Home Magazine: San Francisco is hailed as the home of Oysters Kirkpatrick, sourdough French bread and Green Goddess dressing, but there's one local gastronomic adventure that has never been properly recognized. Its existence has been guarded so tenaciously by natives that only recently, when announcement came that its birthplace would be razed, did any of us latecomers have an inkling of the wonder. The It's-It has emanated for 45 years from one of the once-exotic refreshment stands of San Francisco's historic Playland at the Beach. It was born in 1928 and delivered by amusement park owner, George Whitney. Today, the very mention of its name sets off the salivary glands in a legion of protectors whose childhood Sundays meant a trip to the It stand.

Contains: This product was produced on equipment that also produces peanut and tree nuts products.

It s It Ice Cream

Product details/images for convenience only.  Consult Product label for the most current and accurate information.  We assume no liability for any inaccuracies/misstatements about Products listed on our website/app.