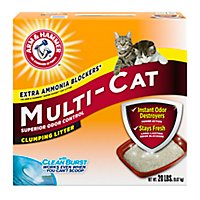 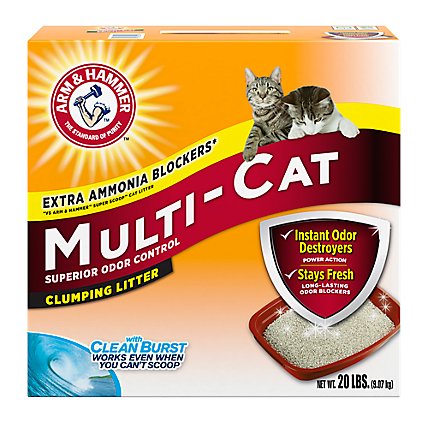 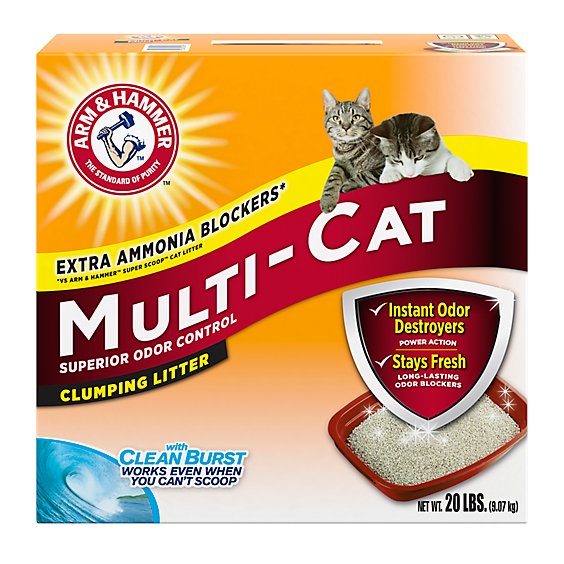 The standard of purity. Destroys ammonia odors instantly. Superior odor control. Advanced odor eliminators. A secret in the litter box. In 1974, the secret to fighting litter box odors was to add Arm & Hammer Baking Soda in the litter box to eliminate harsh odors. That was then. Now the Arm & Hammer Baking Soda experts have an even better litter secret. Arm & Hammer cat litters. Today's better litter for better odor elimination. Don't just cover up litter box odors! Arm & Hammer Multi-Cat Formula with powerful baking soda crystals and special odor neutralizers eliminates even the worst litter box odors instantly on contact, and helps keep your home fresh and clean. Powerful baking soda crystals along with special odor neutralizers eliminate odors on contact, including odors caused by bacteria. Removing rock-solid clumps gets rid of the source of odors easily. Advanced Multi-Cat strength formula helps keep the heavy-traffic litter box odor free. An odor free home starts with Arm & Hammer, no matter how many cats you have. For over 165 years, Arm & Hammer products have provided a safe and effective way to help keep things smelling fresh and clean. Who knows more about odor control? Today's better litter for better odor elimination - Arm & Hammer Clumping Cat Litters. If you're not completely satisfied, we'll refund your purchase price. Questions or Comments? Call us toll-free at: 1-800-524-1328 Monday-Friday 9 am - 5 pm ET or visit our website at: www.armhammerpets.com. Lost. Less than 2% of lost cats make it home. Even indoor cats are at risk. Get your free (via mail when you buy any two (2) Arm & Hammer Cat Litters) pet ID tag. Millions of cats end up in shelters each year. A visible ID tag increases your pet's chance at being found and returned safely. Go to PetTagOffer.com for details! Made in USA.

Contains: Note: Please wash hands thoroughly after handling used cat litter. We want to remind pregnant women and those with suppressed immune systems that a parasite sometimes found in cat feces can cause toxoplasmosis.

1. Fill a clean, empty litter box with 3-4 inches of Arm & Hammer Multi-Cat Cat Litter. 2. Litter forms rock-solid clumps on contact with urine and eliminates odors. Remove clumps and solid waste daily to keep the rest of litter fresh. 3. Add more Arm & Hammer Multi-Cat cat litter to replace what you have scooped out and maintain a depth of 3-4 inches. Once a month, empty the entire litter box. 4. Dispose of used litter in trash. Do not flush or put in drains. 1. Push in tab and lift up to open. 2. Press down to close.